At the beginning of the summer, my daughter was getting ready to go on a short trip with her grandmother and cousin to Gatlinburg.  The morning that we were supposed to take her over to my mother-in-law’s house, I decided she needed a case for the Kindle that she received for her birthday.  Yeah, I’m kind of a spur of the moment kind of gal (and I wonder where my kids get their last minute ideas:).  Of course, I didn’t have a pattern for an e-reader. Just as an aside, I did not finish it in time for her trip. (Sometimes, I just forget that I am not a sewing superstar).

I took some scraps left over from my favorite fabrics (Rivoli girl) and pieced them together into a rectangle big enough to make a sleeve for the Kindle.  I did some organic quilting without any real plans.  All in all, I’m please with how it turned out even if it wasn’t what I envisioned.  I had wanted to have a flower closure that either closed with velcro or that was hooked on a cord that wrapped around a button; I couldn’t figure out how to get the flower to keep the shape so in the end I appliquéd it to a flap that snaps shut on the case. 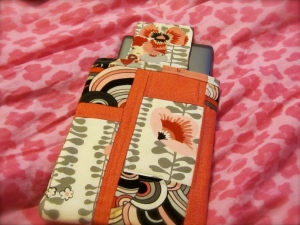 The back of the e-reader case. 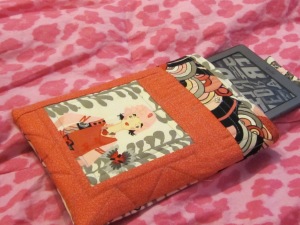 Don’t laugh…this was a difficult quilt for me.  After this statement, I’m sure that everyone is thinking I tried to do a lone star or a hexagon quilt(the hexagon quilt will be a much later post).  Now look at the picture–I know right?  Everyone is saying–“What?, it’s a nine patch–how on earth is that difficult?”

I learned a few things with this quilt.  I started this quilt in October 2010 in the middle of my first quilt project (an appliqué quilt that I have yet to finish)–it was supposed to be a quick quilt that I could have ready for Christmas.  I just finished it last month.  Did you know that you shouldn’t pre-wash charm squares?  I do now but not until I pieced all the nine square blocks and couldn’t figure out why none of my seams matched up.  You should have seen me measuring all my seams to make sure that they were 1/4 inch.  After confirming that they were, I began measuring the charm squares that I had left and found that they weren’t the same measurements and found that they weren’t 5 inches on every side–2 of the sides were less than 5 inches.  I’ll admit, it took a while before I realized that it was my fault.  i distinctly remember commenting to my mother that charm squares were not cut precisely.  (I can’t even tell you when I realized that my pre washing is what shrunk the charm squares but I know now that it was.)  So, I took all the charm squares apart and re-sized them so that they were equal on each side.  Christmas came and went and I put the project aside because it was no longer urgent.

Christmas 2011 came rolling up and I finally finished piecing the quilt and started to quilt it with a walking foot. I broke 3 needles and eventually the walking foot before I gave up on it that year.  Note to self…always have the stitch width at “0” when using a walking foot.  But, I finally purchased another walking foot when I did my son’s improv owl quilt and set about completing this quilt.

It is now finished!  the embroidered label is on it, it’s washed and I’m pleased with it (even though it’s smaller that it was supposed to be and it has little quilting tucks/bunches in it).  I didn’t give up on it and in the end, it doesn’t look too bad.  I’ll probably use it as a table topper during the holidays. 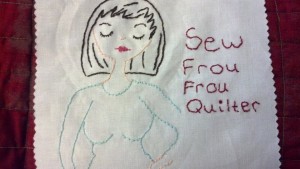 I am a working mother of 3 beautiful children and wife of a very supportive husband (that is addicted to running). I love creative endeavors. Quilting is my way to get in touch with myself and unwind and hopefully connect with others too.

something different in each block

thoughts on education by Grant Wiggins

An Aussie's adventures in quilting

the details of a random life

A lover of all things crafts!

Spreading warm wishes one quilt at a time...

Diary of a Madfabriholic

Quilting, knitting, and a bit of crochet for good measure

A quilt is love.